Invitation to a demonstration: Solidarity with Palestine: Stop the bombing, stop the killing, Monday, July 14th at 6:30PM Prague 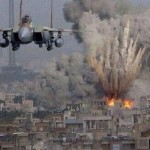 Update: Thank you all for coming yesterday. We will upload photos and a report soon. — A demonstration calling for an immediate end to the bombing of Gaza, to the killing of civilian population and a call to declare a ceasefire now.

Join the facebook / nyx event. Thanks for sharing. Česky zde.

Since July 7th, when Israel declared its new military operation “Protective Edge” (aka “Solid Rock”), at least 90 people have been killed, mainly civilians, out of which at least 21 have been children. The youngest child was 18 months old Mohammed Malakiyeh. There have been injured at least 560 people, mainly children, women and elderly. The number of dead and injured is increasing every day. Behind each number there is a concrete name, a concrete story, a human being. On the Israeli side there have been three slightly/moderately injured soldiers so far.

As declared by the Israeli government, the situation will escalate and it can be assumed to have similar results as the previous Israeli military operations in Gaza: Pillar of Defence in 2012 in which 167 people died, and Cast Lead in 2008/2009 in which 1400 people died. 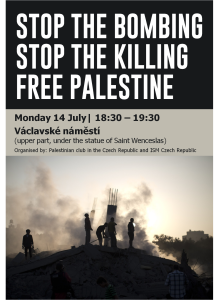 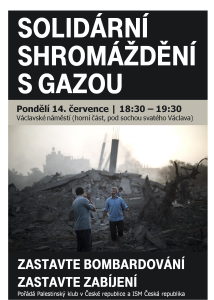 This entry was posted in Akce and tagged Gaza. Bookmark the permalink.