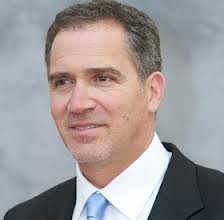 Miko Peled is an author of the book The General’s Son: Journey of an Israeli in Palestine (2012) and a peace activist. Born into a prominent Zionist family (his grandfather was one of the signatories of the Israeli Declaration of Independence; his father was an army general), Miko Peled underwent a painful transformation from a member of the Israeli Special Forces into a staunch proponent of the “one state solution”.

Miko Peled will be in Prague between 10th and 12th of February. There will be three public lectures and a debate held at various institutions, accompanied by book signing. All events in English (one translated into Czech), free entrance. 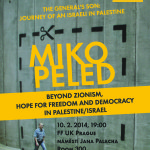 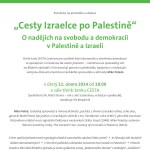 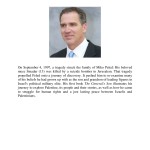 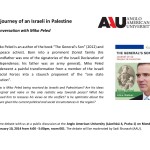 Miko Peled – an Israeli writer and a peace activist, the author of The General’s Son – Journey of an Israeli in Palestine (2012). Born in Jerusalem in 1961 into a well known Israeli family, his grandfather, Dr. Avraham Katsnelson was a Zionist leader and signer of the Israeli Declaration of Independence. His father, Matti Peled, was a young officer in the war of 1948 and a general in the war of 1967 when Israel conquered and occupied East Jerusalem, the West Bank, Gaza, Golan Heights, and Sinai.

On September 4, 1997, a tragedy struck the family of Miko Peled: His beloved niece Smadar (13) was killed by a suicide bomber in Jerusalem. That tragedy propelled Peled onto a journey of discovery. It pushed him to re-examine many of his beliefs he had grown up with as the son and grandson of leading figures in Israel’s political military elite. The General’s Son is his first book and it illustrates his journey to explore Palestine, its people and their stories, as well as how he came to struggle for human rights and a just lasting peace between Israelis and Palestinians.

It’s worth mentioning Miko’s sister and mother of deceased Smadar, Nurit Peled-Elhanan, who is a well known academician focusing on linguistics and Israeli system of education.

Miko Peled’s vision is secular democratic state in which Israelis and Palestinians will live as equal citizens: “As an Israeli that was raised on the Zionist ideal of a Jewish state, I know how hard it is for many Jews and Palestinians to let go of the dream of having a state that is exclusively ‘our own’.”

“For the good of both nations, the Separation Wall must come down, the Israeli control over the lives of Palestinians must be defied so that a secular democracy where all Israelis and Palestinian live as equals be established in our shared homeland,” he says.

Miko Peled is coming upon the invitation of a Czech grassroots initiative Not In Our Name! – Initiative for a Just Peace in the Middle East. This is the first time Miko Peled is visiting the Czech Republic.

Not in Our Name! Initiative for a Just Peace in the Middle East originated in March 2011 with the goal of expressing our disapproval of the visit of Israeli Prime Minister Benjamin Netanyahu to the Czech Republic, and to oppose possible military and technological cooperation between the Czech Republic and the State of Israel. The Initiative organizes public events with the goal of raising awareness in the Czech public of the often uncritical approach taken by Czech political representatives regarding Israel. It organizes public lectures and talks about the Middle East and is part of the European Coordination Committee for Palestine (ECCP).

This entry was posted in Akce and tagged Miko Peled. Bookmark the permalink.